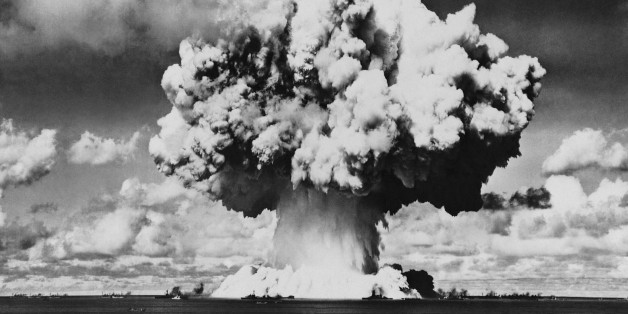 “I told President Clinton that when my third eye looks at the door of the Security Council Chamber it sees a little sign that says only those with economic power or nuclear weapons are allowed. I said to him it’s very difficult to achieve economic wealth.”

Indians and Pakistanis often refer to themselves as reluctant nuclear powers, each forced into the nuclear realm because of the other. However, a closer look at history reveals that India’s quest for nuclear weapons can be attributed to the country’s desire for attaining status and recognition as a global power. Whilst acknowledging that India had attained the capacity to become a nuclear weapon state by 1965, Indian analysts argue that rather than going overtly nuclear, India chose to initiate a series of dialogues on the morality, economics and politics of nuclear weapons.  According to them, even after the 1974 “peaceful nuclear explosion,” India’s military nuclear programme remained largely quiescent and this neglect of policy was reversed only after the revelation of Pakistan’s quest for nuclear weapons during the 1980s. Pakistani physicist Pervez Hoodbhoy explains that Dr. Homi Bhaba kept the mandate of India’s Atomic Energy Commission “ambiguous so that the AEC could also do secret weapons-related research.”

For Indian historians and politicians alike, the prestige associated with nuclear weapons led to the country’s quest for nuclear weapons. This thinking perhaps emanates from writings in international relations whereby writers have argued that “prestige, rather than power, is the everyday currency of international relations, much as authority is the central ordering principle of domestic society.” In this context India’s desire for prestige played an important role in the country’s ultimate decision to acquire nuclear power status. Jacques E C Hymans has explained the decision in relation to “oppositional nationalists” whose decision to attain nuclear power status was influenced both by fear and prestige.  However Prime Minister I K Gujral’s statement contradicts this thesis and also belies the Indian claim of being a reluctant nuclear power. In the words of Professor Amitabh Matoo, “While the BJP may have taken the decision to test…virtually every prime minister in India is implicated in the development of India’s nuclear weapons programme.” George Perkovich’s analysis in India’s Nuclear Bomb further strengthens the idea that India sought membership in the elite club of nuclear weapons states “that sets the standards of international rank.” Moreover the Sangh Parivar in India has always been in favour of nuclear weapons way “before Pakistan or even China acquired them.” According to Ramachandra Bade in 1962, “Only those who wish to see the Russians or Chinese ruling India will oppose nuclear weapons.”

For Pakistan, its pursuit of nuclear weapons began in 1974 after the “shock waves” from India’s 1974 test reached it. Although Bhutto’s famous Multan speech resulted in discussions for the acquisition of nuclear weapons, things actually “moved on ground” two years later when the Buddha chose to smile on India.  Pakistan acquired nuclear weapons capability twelve years later in 1986. The decision to go overtly nuclear however was a consequence of Indian nuclear tests in 1998. Pokhran II prompted Pakistan’s reluctant leadership to demonstrate its nuclear capability even as it held fears of international sanctions. An unwavering critic of Pakistan’s Nuclear weapons programme, Professor Hoodbhoy acknowledges,

“Contrary to what is widely assumed, both then and today, Pakistani leaders were not enthusiastic about demonstrating their Bomb after the Indian tests. The fear of international sanctions was a real one. But belligerent statements by Indian leaders after the tests, and strong domestic pressure – including inflammatory speeches by Benazir Bhutto (then in the opposition) – soon succeeded in forcing Prime Minister Nawaz Sharif and his cabinet over the hill.”

Pakistan’s reluctance to go overtly nuclear is also evident from its numerous efforts at non-proliferation since 1974 including its proposal for the creation of a Nuclear Weapon Free Zone in South Asia. India however refused to be party to such an arrangement because it has “abandoned regional attempts at disarmament in favour of global disarmament efforts.” Between 1974 and 1991 Pakistan made numerous futile overtures within the UNGA aimed at convincing India.

Following the 1998 tests therefore, Pakistan’s “nuclear weapons became the means for neutralizing India’s far larger conventional land, air, and sea forces.” In the contemporary scenario too India’s growing nuclear capability remains a major cause of concern and a major challenge for Pakistan. The issue became even more pronounced following the US-India nuclear deal and the proposed NSG exemptions for India. Despite arguments to the contrary, Pakistan’s military strategists cannot discount India’s Cold Start Doctrine. In the wake of these developments, Pakistan has responded by maintaining its fissile production capability to meet existing challenges. Its strategic compulsions regarding India also explain Pakistan’s stance at debates including those at the CD. Perhaps an evenhanded approach by the West vis-à-vis both the South Asian states would go a long way in allaying Pakistan’s fears regarding Indian intentions.

3 thoughts on “Point: The South Asian Nuclear Trajectory – From Reluctance to Readiness”