The Quad: A Soft Balancing Mechanism in Asia

At the Raisina Dialogue in New Delhi last week, Japan Self-Defense Forces Chief of Staff, Joint Staff, Admiral Katsutoshi Kawano, warned of China’s “powerful and expanding” military power and called upon India, the United States, Australia, and Japan to cooperate with one another to “deter Chinese provocations.” The naval chiefs of the four nations constituting the Quad—the United States, Japan, Australia, and India—convened at Raisina to discuss the search for order in the Indo-Pacific region. The first official meeting of this quadrilateral grouping took place in Manila in November 2017 on the sidelines of the Association of Southeast Asian Nations (ASEAN) and East Asia Summits. Given China’s recent assertiveness on regional security issues, the Quad has the potential to become an effective balancing mechanism to counter China in Asia.

The regional dynamics of the Indo-Pacific are shifting. The United States’ unipolarity is diminishing as China’s rise as a formidable naval power is rising. In today’s world, with Beijing’s anti-access/area denial (A2/AD) capabilities, China may even be able to prevent the U.S. navy’s advance to its shores during a maritime crisis. At the same time, given U.S. President Trump’s America first policy, U.S. allies in Asia are apprehensive about the country’s leadership to the region. In the context of increasing Chinese influence and a noncommittal United States, Indo-Pacific countries must turn to regional balancing mechanisms like the Quad to contain Beijing collectively and hinder the emergence of Chinese regional and global hegemony.

Internal Balancing in the Indo-Pacific

The formation of the Quad would allow like-minded countries in the Indo-Pacific to counter China without formally creating an open military alliance. It would permit India, Japan, Australia, and the United States—four countries with varying strategic priorities, security objectives, and perceptions on alliances—to employ a soft balancing strategy against Chinese hegemony. In this regard, the Quad would be largely based on internal balancing, meaning that it would allow each nation to emerge as a strong regional power in their respective corners of Asia: Japan in the western Pacific, Australia in Southeast Asia, and India in the Indian Ocean, with active support from the United States.

In recent times, India, Japan, and Australia have increased their military capabilities to protect their interests in the Indo-Pacific region. Though its constitution has historically constrained Japan from spending more than one percent of its gross domestic product (GDP) on defense, Tokyo is acquiring advanced defense systems and gradually shedding the pacifist nature of its security policy. Recently, Japan decided to purchase 42 F-35 joint strike fighters from Lockheed Martin and commissioned an indigenously built 24,000-ton helicopter carrier JS Kaga, which can also carry F-35s. With a formidable naval force, Japan could independently protect its interests in the East China Sea dispute with China.

As an emerging economic giant and military power, India is slated to play a crucial role in the security of the Indian Ocean. India is the world’s fifth largest military spender, having spent $55.9 billion in 2016, according to a report by the Stockholm International Peace Research Institute (SIPRI). With its ongoing naval build-up, India is seeking to become a preeminent power in the Indian Ocean Region (IOR), specifically to counter China’s naval expansion into the Indian Ocean. It has set a goal of maintaining a fleet of 212 warships and 458 aircraft by 2027, up from the Indian Navy’s current 138-warship  and 235-aircraft force. The Indian Navy’s most recent Maritime Security Strategy emphasized New Delhi’s focus on maritime security challenges emanating from within the IOR. Upon the 2015 release of this strategy, analysts had remarked on the apparent shift in Delhi’s strategic approach to IOR, including its newfound willingness to become a net security provider in the Indian Ocean. In 2017, India operationalized this concept by creating a plan for the deployment of mission-ready ships and aircrafts across the Indian Ocean along critical sea lines of communication (SLOCS). The navy reportedly enacted this plan to counter China’s pattern of sending submarines and warships into the IOR in recent years. Thus, this naval expansion indicates New Delhi’s increasing assertiveness to contain China in the Indian Ocean. 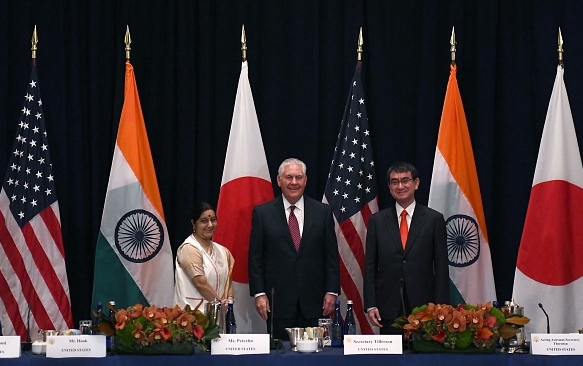 Although Australia has not traditionally shared the same concerns as Japan and India on the threat posed by China’s rise, in recent years, it seems as though Australia is becoming less sensitive about upsetting China and may be willing to become an assertive maritime power in the Indian Ocean and the South Pacific. It has been taking steps to revitalize its navy and signed a $41 billion deal with DCNS of France to purchase 12 conventional submarines in 2016. Despite having less at stake than Tokyo and New Delhi, Canberra is strengthening its defense partnerships with Japan, India, and other major Asian countries to protect its interests in the region. Furthermore, its close diplomatic relations with the ASEAN countries will help to curb Chinese economic influence in Southeast Asia.

The fourth member of the Quad, the United States, will continue to be a preeminent naval power across the Indo-Pacific region. U.S. Secretary of Defense Jim Mattis recently announced that a primary challenge for the United States will be the great power competition with China. Given this announcement, it is likely that the United States will focus on countering China’s active defense posture militarily, providing defense systems and technologies to Japan and India, and promoting joint naval drills such as the trilateral Malabar naval exercises. Diplomatic outreach from the United States can also go a long way in uniting Japan, India, and Australia—three countries that have not always seen eye to eye on Chinese assertiveness in the past.

Balancing China on a Global Scale

The emergence of an aligned quadrilateral grouping could help counter China’s rise on a global level as well. India and Japan are already taking the initiative to counter China’s Belt and Road Initiative (BRI) in Africa. Both countries are focusing on the development of industrial corridors and networks between Asia and Africa through the India-Japan dialogue on Africa. They have proposed creating an Asia-Africa Growth Corridor (AAGC), for which Tokyo has pledged $200 billion. The AAGC aims to ensure that African countries in need of financial investments will not succumb to China to join the BRI out of economic necessity and to counter China’s increasing influence in Africa by means of constructing infrastructure facilities, particularly in littoral countries.

The Way Forward with the Quad

This emergence of an aligned quadrilateral grouping is demonstrative of the extent to which bilateral ties among these four democracies have been deepening in recent times. Much is still to be done to improve quadrilateral coordination and bilateral relationships at various levels, including naval exercises, 2+2 talks, and regular summit meetings. However, as these relationships develop over time, the Quad has the potential to transform from a soft balancing mechanism into an open military alliance. For now, however, the effectiveness of the Quad in countering Chinese influence across the Indo-Pacific region and the world is dependent on how well each country can assert its diplomatic capital and maritime capabilities within their respective areas of Asia.